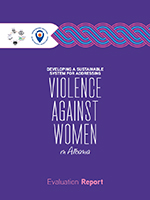 Albanians still tend to consider domestic violence to be a private, family matter and a part of married and family life. As a result, it is very difficult for the local mentality to declare or to complain about domestic violence. In addition, the general perception in Albania is that domestic violence is more an issue regarding Civil Society Organizations than the government institutions.

The Albanian Network against Gender Violence and Trafficking leaded by Refleksione Association is one of the most active civil society networks in this respect. Supported by the UN Trust Fund, the network piloted a multi-sector approach to address domestic violence at the central and local level under the project “Making it real – Implementing the Law on DV in Albania”. Thereafter, a second project “Developing a Sustainable System for Addressing Violence against Women in Albania” perceived as the continuation of the previous one has been supported by the same Fund.

This is the Final external Evaluation Report of this project aiming to assess the overall effectiveness of the action as well as the changes produced as a result of the above intervention including their sustainability. The intended audience of the evaluation report will be: (i) Central Government Institutions and in particular the Ministry of Social Welfare and Youth, Ministry of Interior, and Ministry of Justice responsible for issues regarding domestic violence; (ii) Local Government Institutions responsible for the referral mechanism; (iii) Civil Society Organizations involved in actions against domestic violence; (iv) International Donors Agencies interested in domestic violence; and (v) the Albanian Network Against Gender-Based Violence and Trafficking that implemented the project.