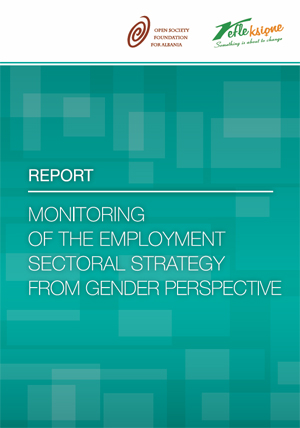 Drafting and publication of the monitoring report of the Sectoral Strategy for Employment 2007 – 2013 under the gender perspective is part of the project “Improving the status of women in society through combating their social exclusion and supporting their access to the labour market”, a project implemented by Reflections Association, with financial support from the Open Society Foundation for Albania (OSFA).

This monitoring report, under a gender perspective, takes values in a situation where more and more we hear discussions and debates about the issue of feminization of poverty. In Albania, as elsewhere, poverty has different consequences for women and men. Gender division of labour or sexual division of labour refers to the assignment of different roles, responsibilities and duties for men and women, based on social ideas of what men and women should do and are capable of doing. Different duties and responsibilities are assigned to women/girls and men/boys, according to their gender-sex roles, and not necessarily according to their skills or personal preferences. In time, this separation leads to a gender division of skills. Men/boys and women/ girls learn and perfect only those considered appropriate for their gender roles. This creates different skills and abilities for them, which are then assigned to one gender only.

Responsibilities of women/girls within the household and family, often limit their opportunities to seek work and to participate actively in the labour market. Conclusions drawn from the 2008 LSMS data show that in female-headed households the average consumption is lower than that of households headed by men.